2019, A Year of Self-Actualization

While I still struggle to carve out time for regular updating of my social media, I have grown in so many ways this past year! Incidents transpired that helped me enormously to see more clearly my own purpose in this big, confusing world. Many of the wonderful opportunities I enjoyed in 2019 were like signposts on my journey, more clearly imprinted than what we often see along the road of life. It’s been quite revelatory, actually!

The year began with my stunning new website getting some attention, which freed me from dependence on “agency”-type services. I may get fewer inquiries per month, but the ones I do get are more targeted to me and my particular services, rather than the general bargain shopping of online searches. I’m quite proud of the media presence I’m developing! This year I found many uses for the beautiful logo that was created for me by the lovely and talented Christina Johnson, (also the designer of my entire website)! Check out her business page, www.thepixelsandprintco.com. The Flabbergast logo has recently been added to promotional coloring pages and coffee mugs, a wooden sign, and a Happy Birthday silk banner.

Speaking of promotions and contacts, some new performing opportunities came my way this year, including Blue & Gold Dinner shows for two different Cub Scout troops, a Renaissance Faire at the Kentucky Castle, and a three-day weekend at Cox Farms’ famous Foamhenge area of their Fall Festival! I’ve been wanting to perform at this particular festival for years! It seems like such a natural environment for a whimsical wizard, (their hayride even goes through a barn made up as The Wizards’ Woods!), plus the farm is just a couple of miles from my house! This year I reached out to the entertainment coordinator for the festival, pointed her toward my website, and got three dates out of it. My strolling entertainment at the festival, with Wickstrom the Dragon puppet and some pocket tricks, was a huge success, and I have been promised more dates for next year! Earlier this December, I got to play Santa Claus for “Breakfast with Santa”, a major fundraiser in Middleburg, which apparently is a big deal holiday event around here.

It was my honor to be a returning guest to several fan conventions, which is always fun and rewarding for me. After a year off from MarsCon, I came back as a guest for a fairy-themed weekend, and had a wonderful time! At MystiCon, I got much of my show video-recorded, which helped me to get some new content on my YouTube channel. Dragons were a big theme feature this year, which pleased Wickstrom greatly, although we were both a bit intimidated by the full-size dragon sculptures that loomed throughout the hotel! I was also grateful to return to Free Comic Book Day at B&D Comics in Roanoke, ConGregate in NC, WyvaCon in Wytheville, and the Gloucester Comix Con at the Gloucester Public Library!

My dear, dear friends at Medieval Fantasies Company were good enough to invite me to some of their charming events for yet another year, including my debut at Staunton’s Victorian Spring Fling as a magician from that time period. While they presented the Founders of Hogwarts at such events as the Wizarding Winery at Horton Vineyards, Magic at the Museum, and of course Queen City Mischief & Magic in Staunton, I was proud to be included as Renaissance headmaster Fytherley Undercliffe. These dates already account for quite a bit of magical activity, but perhaps my favorite celebrations of the year were the Renaissance Faires at Kentucky Castle and Fort Bragg! As Flabbergast the Wizard, I entertained small groups at my little Medieval tent, as well as performing several stand-up shows to larger audiences. The crowds at both faires were very friendly and responsive, and I had a delightful time evoking their wonder and laughter!

The high point for me at any of these annual events is meeting up with old friends and making new ones, and this past year afforded me some very special encounters. At WyvaCon, I finally came face-to-face with Brandon Owen, a professional magician in that area with whom I have been communicating online for years. We made a striking pair performing an impromptu team-up, me in my wizard garb and him in his Victorian costume! At the Kentucky Castle, I met a very enthusiastic young man dressed as a Middle Earth ranger who was very excited to meet a wizard at the faire. I later found out that this gentleman is JP Cummins, the most perfect Dumbledore cosplayer I have ever seen! The surprise encounters didn’t stop there. At Queen City Mischief & Magic, I got to meet John Granger, the author of How Harry Cast His Spell, considered by many to be the authoritative analysis of the far-reaching popularity of the fantasy world created by JK Rowling. I had already begun reading his book long before I found out he would be speaking at QCMM, so I brought my copy to get his autograph. Somehow I got scheduled to perform just before his lecture, on the same stage! He commented to me both verbally and in his inscription that my “real magic” was a hard act to follow! As I posed for dozens of photos at that event, I didn’t realize that one mad Potterhead I was photographed with was Reese Roper, lead singer of the alt rock band Five Iron Frenzy. 2019 was unquestionably a year of increased street cred for Flabbergast!

As if all this wasn’t enough to cement in my mind that Flabbergast the Wizard has a place in local fantasy culture around Virginia and surrounding regions, one particular weekend in 2019 will forever stand out for me. At the end of March, I was asked by a friend of mine who happened to be the Vice President of the International Costumers Guild, Mera Rose, whether I would be attending RavenCon on April 6. I told her I wasn’t planning on going, as I had several conventions on my calendar already and I had not yet been invited to this one. (2020 will be my first year as a Guest of RavenCon!) Mera told me that the masquerade for that weekend needed an additional judge, and as I had previously served as a judge for another contest Mera had directed, she asked if I could come to Williamsburg just for the masquerade. I worked it out in my schedule to come down and help out. To make a long story short, the whole thing turned out to be a ruse to get me there for a surprise public presentation at the con. In March, at the ICG’s CostumeCon, my name had been selected for an award. This was another convention I chose not to attend as the timing was not convenient for me to travel. Since I was not present to receive the award, Mera arranged to make part of the RavenCon Masquerade a little ceremony just for me. I was absolutely floored! The award was The President’s Award, in recognition of community service and outreach through costuming. Mera gave a very heartfelt speech, highlighting my relationship-building with children at fan conventions, in particular with her own children with behavioral disabilities, and connecting it to my “day job” working with special education. My eyes were full of tears as I accepted the award to applause that rivaled any I have received for my magic shows. Several people congratulated me afterwards, intimating how they had played their part in the orchestration of this mind-blowing surprise evening! Wow! That award now stands prominently on a shelf just above my sewing machine, to remind me that my “dressing up” has more impact on the world than I ever realized before. You never know where following your passion will lead you!

Thank you for looking at my website, thus joining in on my journey, even if only for a moment. I hope it adds some kind of magic to your journey! 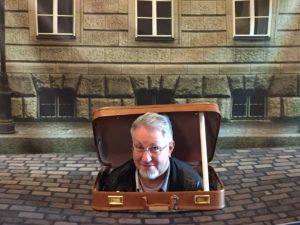